The second life of cannabis or where to look for the investor’s benefit?

"In the UK, hemp was equated with Prozac." "In Belgium, allowed the possession and use of marijuana." "Marijuana entered the pharmacy of Holland." "In Israel, allowed the drug with marijuana." "A referendum on the legalization of marijuana will be held in Nevada." “In the state of Idaho, it is allowed to smoke marijuana while driving" ... And the most sensational headline: "The Canadian government legalized marijuana." Theinternet is full of such news already for several years. Is it possible to talk about the second life of this plant not only for medical, but also for recreational purposes, or is it just another “bubble” and an attempt to earn on the eve of the crisis?

From a medical point of view, the use of cannabis has beneficial effect on the human body: improving appetite, relieving tension in muscles and pain, preventing allergic dermatitis. Cannabis can also be useful during the onset of post-traumatic symptoms and stressful conditions. Hemp has been much more successful in establishing its position worldwide in the medical sector rather than for recreational purposes. Perhaps the beneficial effect of legalizing marijuana is not so obvious to the authorities? However, in this case, first of all, we are talking about the economic effect of this process. Of course, eliminating the illegal marijuana market without a decent alternative is problematic. Meanwhile, as a result of legalizing recreational cannabis, you can increase GDP by tax revenues, stimulate the transfer of the illegal market "within the law" and occupy a free place in the global market in this promising industry. A positive economic effect can be created indirectly due to the influence of cannabis on other markets: cosmetics and a healthy lifestyle; product packaging; agriculture; outdoor advertising; alcohol and tobacco products; textiles and fashion industry; biofuels and energy.

The current global map of the legal status of cannabis is quite dynamic, with changes clearly taking place in its favor. In 2013, Uruguay became the first country to legalize the cultivation, sale and use of marijuana. To date, marijuana is partly legal in 30 countries of the world, in 14 countries it can be used for medical purposes.

According to the research of the Brightfield Group, which is engaged in core research in the field of marijuana, the global market for the cannabis industry will reach $ 31.4 billion by 2021, including the recreational cannabis market estimated at $ 5.7 billion. The United States and Canada account for more than 86% of the global sale of cannabis. The European market is represented by medical cannabis, where the sales leaders are Germany, the Netherlands, Spain and Switzerland.

How promising is the marijuana market?

As early as 2018, sales of legal marijuana grew by 37% and reached $ 9.2 billion. Three factors are fundamental: (1) the industry of legal marijuana is large, (2) it shows excellent growth, and finally (3) the growth potential is very high. It is predicted that marijuana will also be able to occupy part of the cigarette and alcohol market.

It is expected that clear requirements for the quality of the goods will be defined - this causes not only considerable prices for marijuana and companies in this business, but also the risk of cannabis deficiency. At the moment, licensed manufacturers are barely able to meet the growing demand for marijuana used for medical purposes.

The North American Marijuana Index, which includes the largest manufacturers, auxiliary players and manufacturers of marijuana-based pharmaceutical products in North America, has increased by 75.6% since 2017, over the same period, the Canadian Cannabis LP Index grew by 103.32%. The largest growth since 2017 in the wake of changes in legislation showed Canadian manufacturers, including Canopy Growth (+ 64.14%), Tilray (+ 137.44%), Aurora Cannabis (+ 25%).

Currently, the champion title in the industry belongs to Canada, which, as a result of the full legalization of marijuana in October 2018, has a huge advantage over the United States: the ability to import cannabis. In the US, individual states have laws on its full legalization, while at the federal level there is still a ban. Thus, in fact, American hemp manufacturing companies, despite the high sales in the domestic market, are deprived of the opportunity to build a global business. Customs is subject to federal laws, which means that it is impossible to import and export marijuana across the US border - American entrepreneurs are cut off from the international market, including and from the largest exchanges. The only alternative for American companies is the Canadian Stock Exchange.

While Americans suffer from local legislation, Canadians seize foreign markets, intending to become the number one supplier in the market for legal marijuana. Thus, Canadian enterprises, receiving huge investments and conducting M&A transactions with the aim of increasing capacities, are actively developing cross-listing (they go to stock exchanges not only in their own country, but also abroad, mainly in the USA). 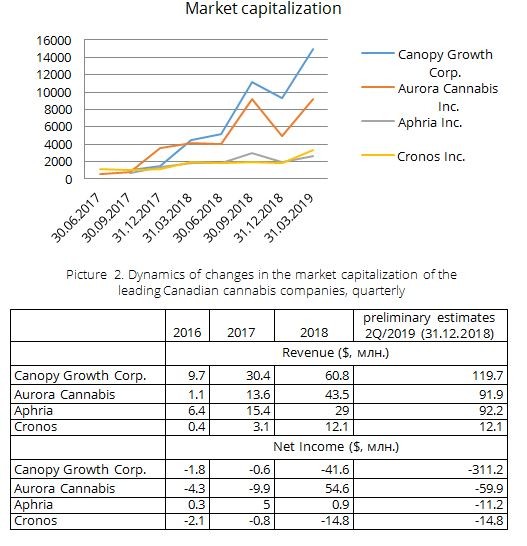 Active investor interest in cannabis manufacturing companies led to a record increase in their market capitalizations in 2018-2019. The graph shows the growth dynamics of market capitalization of the most famous players in the Canadian market. The fiscal year in Canada begins on July 1, while it is clear that in Q1 2019 (ended September 30, 2018), the stock price was first of all laid down by the effect of the upcoming legalization of marijuana, and Q2 (ended December 31, 2018) clearly shows disappointment from the financial statements of companies.

Active investor interest in cannabis manufacturing companies led to a record increase in their market capitalizations in 2018-2019. The graph shows the growth dynamics of market capitalization of the most famous players in the Canadian market. The fiscal year in Canada begins on July 1, while it is clear that in Q1 2019 (ended September 30, 2018), the stock price was first of all laid down by the effect of the upcoming legalization of marijuana, and Q2 (ended December 31, 2018) clearly shows disappointment from the financial statements of companies

What is the phenomenon of Canadian companies? Most likely the answer lies in the huge potential for future growth of demand for marijuana related to the wave of weakening legislation in such countries as Germany, Chile, Peru, Italy, Poland, the Czech Republic. At the same time, the open markets have not yet managed to establish their own cannabis production and need suppliers.

In order to gain a foothold in this market, entrepreneurs not only increase their capacity by expanding the area for growing cannabis, but also actively pursue M&A transactions and open up production in other countries. Great move 2in1: increase capacity and eliminate competitor.

Is the market a promising object for long-term investment? Or can it be considered only for speculative transactions?

And if the latter is beyond doubt, since the market is very volatile and any news about mergers, takeovers or even the acquisition of new areas for growing cannabis is reflected in stock prices, then the initial question is worth looking into.

Currently, the estimates of companies engaged in legal cannabis are too high: the capitalization of Canopy Growth exceeds income by 125 times, and for Cronos – 270times (meanwhile, the optimal value for a developing business is up to 20times).

This picture may change in the next six months, as in the wake of the legalization of cannabis, companies claiming leadership have significantly increased their capacity in order to increase production relative to current volumes several times. Aurora Cannabis increased the production of marijuana by 57% in the 4Q/2018, and plans to increase it another 3 times by June 2019.

Over the same period, HEXO increased production by 39%. This is not the limit of plans for the market players. While revenue growth can really be expected, reporting will still show negative net cash flow of companies as well as losses also in 2019 and possibly 2020. This means that we are waiting for a temporary price drop. Most companies announce the release of reports for 3 and 4 fiscal quarters of 2019 in April-May and August, respectively.

At the moment, the cannabis market (both medical and recreational) has moved into a downtrend amid the disappointing expectations of the financial statements for the 3rd quarter of 2019. This can also be considered as a favorable moment to buy.

Any medal has two sides, and there are always many pitfalls in a new market:

• Financial difficulties for manufacturers - companies have problems with business lending and tax accounting (relevant for companies in the US);

• Cheap promotions. Companies with cheap stocks are not credible. Their value is growing rapidly, but it is just as fast falling. In this aspect, in order to level the risk, you should pay attention to pharmaceutical companies and specialized startups;

• Political aspects - mainly concerns companies in the US and the federal ban on cannabis.

Of course, despite Canada’s advantage over the United States, there is a significant risk of investment in these companies. Doubt about the future leadership of Canada in the global market is due to the product's compliance with the requirements of the sales market, which is represented mainly by countries where medical marijuana is legalized. The Canadian climate and conditions for large-scale production may prevent Canada from becoming a market leader with its own production in Colombia, for example, where the climate is more suitable, the cost of production will be less, and the quality will be better.

The marijuana market really is the future. And if it is difficult to compete with the illegal recreational marijuana market, and this replacement process will take time, the massive legalization of medical cannabis opens up great opportunities. Accordingly, it is worth paying attention to companies that focus on the quality and uniqueness of products to meet medical requirements, and at the same time are located in a place of a large sales market (populated areas). Another promising opportunity to "skim the cream" on the global wave of legalization of marijuana with less risk may be the shares of those companies that specialize in the production of related or alternative products. Make deliberate decisions, but be open to new things - after all, the future lies with it.