2018 is certainly not 2008, but it will be remembered for its events in the global economy and politics for a long time. From the best economic growth since 2014 and the lowest unemployment rate since 1969 in the United States to a slowdown in the global economy and the threat of recession at the end of the year; from a new record of the longest bull market lasting more than 3453 days to the grand collapse of the market in February, October and December, the latter is also recognized as the worst December since 1980.

The year was restless for oil too. If in the first half of the year, the OPEC + proposal gave its positive results in reducing the oil supply, which moved the price up until October, then the end of the year for black gold was also deplorable. The sharp drop, as well as the general decline in global economic growth and political conflicts, also adjusted the forecasts for 2019. 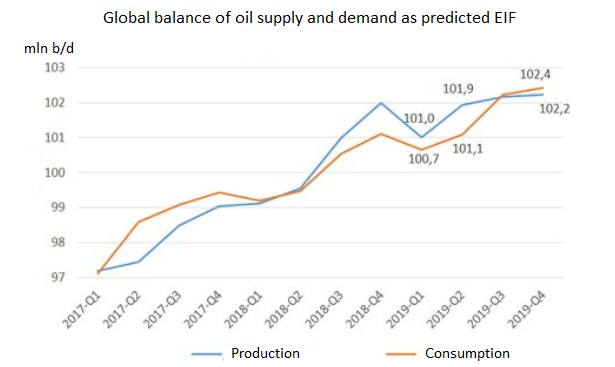 According to forecasts, Brent will fluctuate at the level of 61-69 dollars per barrel, and WTI will be located in the range of 54-63 dollars per barrel. Additional boost for the oil price can be expected in the second half of the year, when according to the Energy Information Administration of the US Department of Energy (EIA), consumption will begin to exceed production, though mainly due to an increase in US production for its own domestic market. The main thing is that one of the most panic-striking forecasts for 2019 - oil at $ 30 / barrel - will not come true.

Of course, another terrible forecast for 2019 is the further collapse of the stock market, especially in anticipation of the crisis. The Fed is also causing depressing sensations with its systematic increase of interest rates. After all, reduction in liquidity is only a method of leveling the consequences of dealing with the 2008 crisis. Have to say – in the last moment as we are standing on the threshold of the next.

And although the crisis in 2019 is most likely not worth the wait, it is crucial to reconsider our investment strategies in the current circumstances. Uncertainty and volatility always open up new opportunities - both for short-term speculation and for entering long-term investments into high-quality assets and securities of promising companies. Perhaps the time of “Buffett - Strategist” will be replaced by the time of “Soros” and speculation, but still the main task of the investor will be to reliably protect existing assets. Reliable assets - money, short- and medium-term bonds, and precious metals should make up most of the assets.

Let's go through step by step, which tools you should pay attention to in 2019, while separating the investments into two categories depending on the goal: not to lose capital and increase capital on asset growth.

Traditionally, government bonds and bank deposits are considered to be one of the most reliable instruments. The default of a state is still less likely than a bankruptcy of any bank. By the way, the latter themselves acquire treasury bonds on our deposits. In fact, treasury bonds and bank deposits only compensate for inflation losses, and I personally would recommend skipping this intermediary step – banks – and immediately invest in bonds.

But in this case, one should take into account the tightening of the monetary policy by the leading central banks, which, as a result, hinders the development of the debt market and contributes to a decrease in profitability. In 2019, it is still possible to count on a moderate growth of the US economy and other leading economies; therefore, it’s too early to talk about the reversal of the bond trend, but it is still better to give preference to bonds with a maturity in the next 2-5 years. In the case of corporate bonds, a maturity of no more than four years would be preferred with Moody’s ratings not lower than Ba1, and S&P - not lower than BB+. We recommend to pay attention to Ericsson and AT&T, while it is better to step aside from the American companies with low ratings. The tightening of Fed policy and Trump's controversial foreign policy could trigger such companies to lose part of their profits.

The second tradition in our goal of preserving capital is investing in gold, with no more than 5-10% of the portfolio in order to diversify the portfolio and calm your own soul. In my opinion, platinum begins to be rehabilitated after reaching its bottom at the level of $ 765.20 in August 2018 and against the background of an uncontrollably growing palladium it is quite possible to expect a change in the trends of these two metals.

And let the whole world talk about a catastrophic shortage of palladium supply, investors' exposure will sooner or later become stronger than this soap bubble. 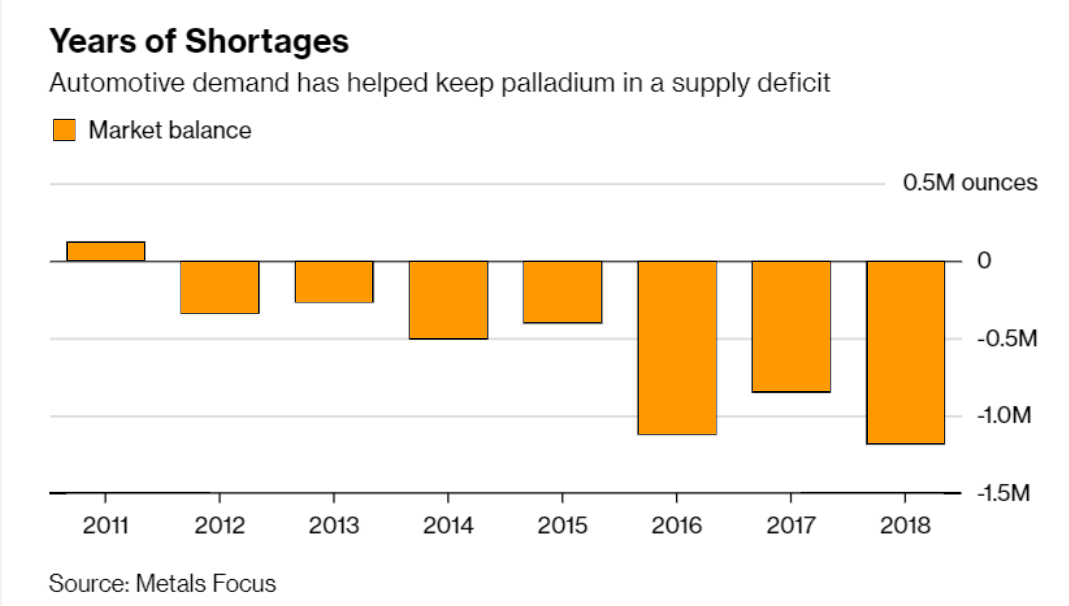 The assets of non-cyclical sectors, which include communications, utilities and biotechnology, may be promising. The technology sector shares sank significantly in 2018, although they are still slightly overvalued. This can not be said about the biotechnology sector, the revival in which began in 2017. Biotechnology shares have a high growth potential, and the use of the latest technologies in this direction is an excellent driver. Interesting may be the American biopharmaceutical company AbbVie with a capitalization of more than $ 134 billion. The company is fundamentally undervalued compared to its main competitors, with a clear trend in profit growth.

In the past year, communication companies have improved their attractiveness, especially in the wake of the 5G development. AT&T shares, especially after acquiring Time Warner with a dividend yield of 6.5%, have all the prospects to become an excellent protective asset.

Another black horse could be stocks of airlines such as United Continental, Delta Air Lines and American Airline. Recently, passenger traffic has increased significantly, and if the forecast for oil prices comes true, then these companies can get super-profits by reducing costs. The main thing is not to forget to hedge your investments in airline companies, otherwise, the unlikely event of a plane crash can reduce your investment to 0.

The marijuana market also did not fully reveal its potential in 2018 after its legalization in Canada. The prospects of this market are comparable to the profits from the sale of coffee in 2017, additional factors are also important: the legal cannabis industry is large and already relatively profitable; the likelihood of further growth is very high; and legalization and, moreover, the introduction of this market into the health sector is an excellent driver for increasing future demand. There is a feeling of deja vu with the abolition of the “dry law”: the ban increased the demand for goods, and the lifting of the ban completely drew it up. The situation is still ambiguous, but it is worth remembering that there is an opportunity behind every uncertainty. According to some forecasts, the marijuana market will grow by 150% by 2021.

In the case of an IPO, capital growth is expected in the long term. 2019 may well be the year of large IPOs, primarily unicorn companies, unless of course the government crisis will lead to the disruption of some of them.

So, at least 6 technology companies, including such well-known Silicon Valley companies like Pinterest, Slack, and AirBnB, announced their intentions in this direction. The upcoming IPOs of the companies Uber and Lyft, which investors are bidding, are already quite publicly discussed. However, in the case of fast-growing companies, it should be understood that, giving priority to development, in the short term, profits will suffer.

Perhaps it makes sense to look at smaller companies. Thus, according to CB Insights, when analyzing non-traditional public signals (staff expansion, web traffic, etc.), promising technology companies with a venture capital of $ 5 billion were selected, whose IPO’s can be expected in 2019 with high probability: Cloudflare, Zoom, Rubrik, Medallia. Let’s follow the news!

Many companies in the health sector have also planned to go public, but the government crisis may not be good for smaller biotechnology companies that produce medical equipment. At this stage, these companies are already looking for a plan B, from the sale of a part of the company to large-scale private financing, due to the risk of lack of funding.

By the way, several US marijuana manufacturers are also planning to enter the market with an IPO this year. After the recent adoption of the farm bill, we can expect the IPO’s of such American companies as Pax Labs and KushCo.

Of course, the investment portfolio is not limited to the above ideas. You can find many more interesting and promising ideas in the stock market . But do not forget about the risks. The year 2019 does not promise to be simple, but it will definitely provide many opportunities for successful investments.