Renewable, or regenerative, "green" energy comes from sources that, on a human scale, are inexhaustible. The basic principle of using renewable energy is to extract it from the processes constantly occurring in the environment and to provide it for technical use. Solar, wind, and hydropower acquired the greatest popularity among the population; however, the variation of its sources is much wider. 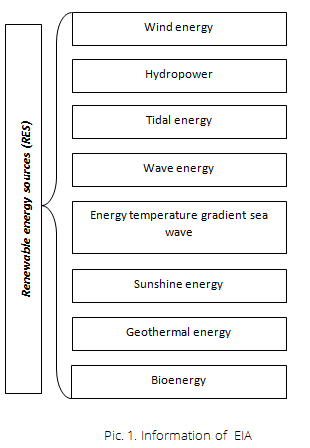 In 2018, more than 170 countries in the world have plans to use the renewable energy sources, 150 of them have implemented policies to encourage investment in clean energy. Such measures by the states contribute to the growth of the industry – in 2017, renewable energy accounted for 70% of the net increase in global generating capacity against 63% a year earlier. Leaders in the development of "green" energy at this moment are China, Denmark, Kenya, India and Iceland.In the same 2017, the global renewable energy sector produced almost 27% of the global electricity (including 16.4% in the hydropower industry). Wind and solar energy gained significant strength, and their share in the global energy mix increased by 1 pp. The growth of the share of wind and solar stations in the production of electricity is clearly presented in the diagram below.

Undoubtedly, 2018 was not the best  year for alternative energy. It's simple: the industry is relatively new, requires large investments, but the year was very unpredictable for new investments. The capacity expansion was weaker than the previous year, and even so, 409 wind turbines at 15 offshore (coastal) wind power plants with a total capacity of 2.65 GW were commissioned in Europe. Probably, the continental change of climate and significant winds in Europe last year played into the hands of the industry. 85% of new capacities were in the UK and Germany. The leader among suppliers of offshore wind turbines was Siemens Gamesa, which accounted for 62% of the installed capacity in 2018. Currently, six more offshore power plants are under construction in Europe, including the world's first offshore wind farm with a capacity of over 1 GW - Hornsea-1 in the UK.

But as they say: the medal has two sides. Let's talk about the problems of the industry.

1. Dependence on weather and time of day : For clarity, consider the situation in Germany. In 2017–2018, the level of renewable energy dominance over traditional sources was achieved in the electrical system, while the production of electricity from hard and brown coal decreased. Germany, in principle, decided to abandon nuclear energy by 2022. Strong winds were both the positive side of the wind energy development medal and the reverse: the summer months were distinguished by sunny days, the autumn months were too “fruitful”. Such natural factors lead to excess energy, for which there is no high-grade mechanism to regulate and distribute yet. Moreover, in the case of "surplus" energy companies periodically have to send electricity abroad and even pay to sell it there.

2. Thesecond conclusion suggests itself from the first problem: the absence of energy storage systems, whichare necessary both in case of an excess of energy from renewable sources, andensuring its reserves under “unproductive” environmental conditions.

3. Animportant issue is also the imperfection of the legislative framework for the regulation of the industry,including lack of specific growth rates, scale and industry standards.

4. Alternative energy is not yet integrated in other sectors of the economy (transportation, water supply, etc), which leads to low usage.

However, any problems can be solved with enough desire, while desire is generated by prospects, and realized by the will of political and state leaders in the form of reduced  subsidies to fossil fuels and nuclear energy, increased investments in renewable energy infrastructure, and defined clear plans, goals and deadlines in the above sectors.

Perspectives of the RES industry

If previously discussed plans and goals have not yet been determined, the perspective of the industry is beyond doubt.

According to analysts' forecasts, primary energy consumption will “reach the plateau” by 2035, while it can be argued that the peak of coal has already passed in 2014, oil consumption will continue to grow until the early 30s, and natural gas will continue to grow over the next two decades. Global electricity consumption will double by 2050. This growth will be fully ensured by using renewable energy sources (RES): by 2035, electricity production from renewable energy sources will be 50% of the world total; and 73% by 2050.

Growth drivers for new renewable energy sources may be the fact that new solar and wind power plants in the future will become cheaper than the already existing facilities of the “traditional” energy generation. Moreover, according to the report “Analysis of the present value of energy” and the study of the economy of the energy storage devices of the investment bank Lazard, the economy of renewable energy is already improving. In some cases, the construction of new alternative energy projects is more profitable than maintaining conventional power plants. An interesting fact is that the cost of the most expensive new solar or wind power plant is $ 56 per MW / h, and the cheapest new coal-fired power plant will cost $ 60 per MW / h. Thus, the further construction of traditional power plants loses its economic sense. 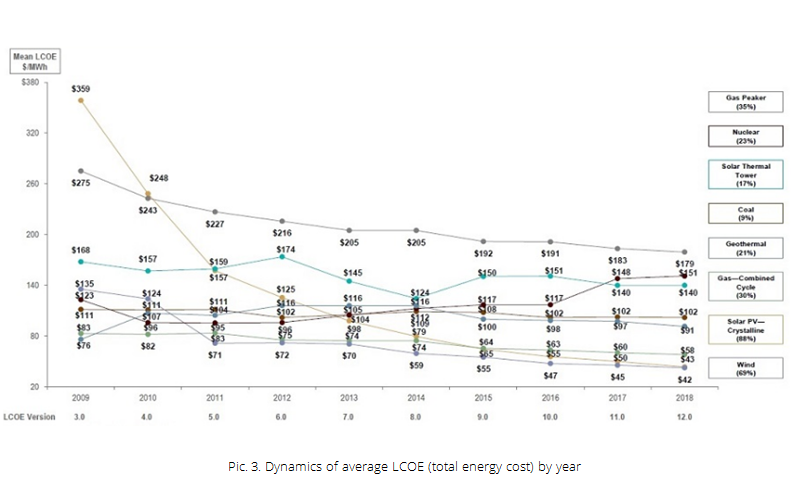 Renewable support is provided by the European Union, which has very ambitious goals to build an economy with zero carbon emission by 2050, for which it will be necessary to obtain up to 80% of all energy from alternative sources. 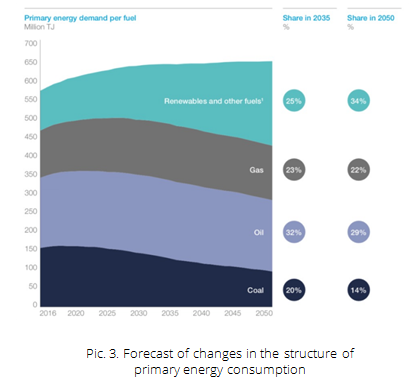 Assessing the situation realistically, a significant reduction in coal consumption is expected, but the oil and gas sector will still be in steady demand. In this situation, de-carbonization will be moderate; by 2050, it is realistic to achieve a 20% reduction in emissions.By the way, the consulting company McKinsey Energy Insights published a forecast for the development of the global energy sector, in which the development of electric transport, whose global sales are expected to be 100 million electric vehicles per year by 2035 , is one of the arguments in favor of the development of renewable energy. It sounds optimistic.

Thus, the current picture of the industry is reflected, the problems are indicated, and the prospects – outlined... Investments always carry risks, however there are industries that will have their development in one way or another due to the prevailing factors. The resources on which the world energy complex is now based are exhausted, and the extraction of the reserves at the disposal of mankind creates increasing costs. Therefore, sooner or later the question of finding alternatives will arise. Given the latest trends in the world of environmental protection (in particular, the Paris Agreement on Climate 2016), we are already on the verge of having to look for an answer to this question.