BREXIT: аre all events for the better?

•How was it and how long will it last?

•Perspectives and implications of BREXIT for the UK.

•What does BREXIT promise to the EuropeanUnion?

•Where to look for the benefit to theinvestor?

How was it and how long will it last? 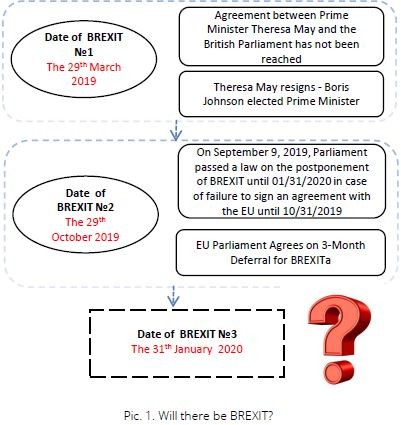 On June 23, 2016, a referendum on leaving the European Union was held in Great Britain (GB). This was not the first attempt to sabotage the termination of EU membership, but this time the supporters of BREXIT won with an advantage of 3%. And although the date of October 31 and the next significant coin minting has sunk into history, the fact of Britain leaving the European Union in the not so distant future is no longer in doubt.

Obviously, this historic event will have consequences for the UK, the European Union, and the global economy as a whole. And if the events of the days of the past are already an indisputable fact, then the future may have several storylines and, like the truth, is presented for each player in his own way. Moreover, there are probably not so obvious stakeholders in this story.

At the moment, the extension of the UK exit from the EU until January 31, 2020 has been agreed, in the UK, by a mutual decision of both Conservatives and Labor party, early parliamentary elections will be held on December 12, 2019.

At the same time, the main threat in these elections, the leader of the Labor party, Jeremy Corbin, sees not so much the victory of his opponents as the subsequent influence of Donald Trump on the British economy and the healthcare system in particular (NHS) with the help of his “phenomenal” trade agreement, which has been waiting for its June high point.

Perspectives and implications of BREXIT for the UK

It is precisely the initiator who sees the most promising prospects in any process, and in this case they proceed precisely from the root causes of BREXIT for Great Britain.

The idea of integration into the EU for the good has been and is mainly for countries with weaker economies, while the UK has always been worried about its own sovereignty in the framework of European integration. The movement, called euro-skepticism, became especially relevant in the zero years after the accession of Eastern European countries to the EU.

The EU migration crisis has only aggravated the situation: the UK, as a member of the EU, cannot completely shut itself off from the flow of refugees from poor countries. All these factors together provoked the need forBREXIT.However, if the UK still has to wait for the fruits of its actions, the consequences for the economy are already taking place.

So, point by point:

1. The weakening of the national currency

The depreciation of the national currency had an ambiguous effect on the country's trade balance: exports became much more affordable than imports. As a result, despite the growth in exports in quantitative terms, the trade deficit increased in September 2019 more than expected. The apparent trade deficit increased to a five-month high of - £ 12.541 billion from - £ 10.825 billion in August. Analysts forecasted deficit of - £ 10,000 billion. 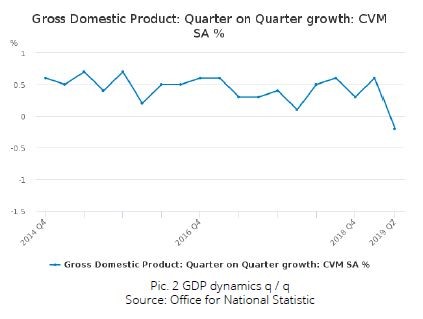 It should be noted that the country's economy suffered not only from cutbacks in investment in new projects, but also from the outflow of capital from the UK due to re-registration of companies in the EU. So in the second quarter of 2019, the decrease in GNP was 0.2%: everyone, with bated breath, waited on March 29. In many respects, the economic decline in the 2nd quarter of this year was due to a decrease in car production by 24%. Moreover, if previously a slowdown in the growth rate of GNP was periodically recorded, then the 2nd quarter of 2019 was marked by a drop for the first time since 2012.The lack of a final understanding of the conditions under which the UK will exit the EU, and how the country's business will be regulated in the future, primarily affected the volume of investment in the economy. So according to the study “fDi Markets” for nearly three years until the end of 1st quarter of 2019, foreign companies' investments in new projects in the World Bank decreased to $ 85 billion, compared with $ 121 billion over the previous 3 years. For comparison: investments in the remaining 27 EU countries for the same period increased by 43% to $ 340 billion.

In the 3rd quarter, UK GNP was rehabilitated with a growth of 0.3% compared to the previous quarter, but the economy continues to look "very pale."

But from realities we will pass to prospects. The following are the obvious consequences of BREXIT, both positive and negative.

According to preliminary estimates, 80% of the European financial technology sector companies are registered in the UK, therefore it is logical to dwell in more detail on the consequences for this sector. So in 2018, according to PitchBook, technology companies raised £ 1.8 billion in venture financing, including investments in artificial intelligence grew by 47% compared to the previous year and amounted to £ 736 million. Due to the adequacy of the British regulator in the financial sector, the understandable process of obtaining licenses in the country, offices of companies such as Revolut, TransferWise, Monzo and others were opened. These companies are focused on work not only in the UK, but also in continental Europe.

What is the way out for such companies?

Transfer of capital or part of capital to other countries of continental Europe and obtaining additional licenses in the EU. Perhaps there will be a need for business diversification.

What to do UK?

Assess the current situation and determine which sector of the economy can take a fundamental position for the country instead of the financial technology sector, since the UK was attractive precisely for its loyalty in financial legislation, but within the EU.

What does BREXIT promise to the European Union? 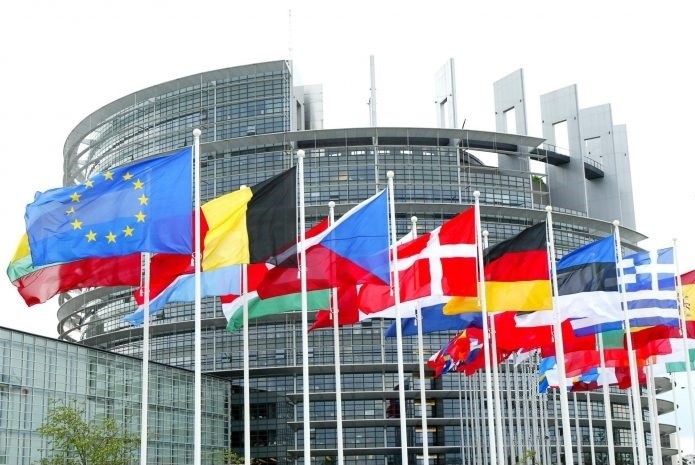 France took the third place in terms of attracting venture capital in 2018 among EU countries. Therefore, while maintaining the continued active position of Emmanuel Macron on promoting the country on the world stage, France can seriously compete with Germany. But! It’s too expensive to do business compared to the UK.

It is likely that amid the obvious difficulties of BREXIT, those wishing to leave the EU will appear not so soon. Meanwhile, in the continental Europe, under the influence of close cooperation between France and Germany, there is a tendency to put forward new integration plans.

Given the fact that the main production facilities remain intact in the European Union, and in anticipation of the recession, the opportunity to take part in the struggle for leadership in the financial sector is only a bonus, we can safely assume that the leading economies will not suffer significantly from BREXIT.

And what are the prospects for countries with a weaker economy, whose citizens sought happiness in the lands of the United Kingdom? As a result of the termination of UK membership in the European Union, citizens of the latter will need to apply for "settler status" to continue their work or live on other grounds. In advance, EU citizens residing on legal rights for more than 5 years already have the right to apply for such a status. Citizens whose status is less than the agreed period will receive 2 years of grace period to settle their status. However, it can be assumed that only few citizens of Poland, the Baltic countries and other countries of continental Europe with weaker economies will be returning to their homeland. As a result, at least it is possible to predict a hit on the GNP of countries in the amount of lost capital inflows from their citizens from abroad, an increase in budgetary social payments for unemployment or other items, and of course a glut in the labor market. Although probably not everyone will want to return to their native lands and try to find happiness in other European countries with a similarly strong and stable economy, where some UK companies are already transferring their production.

Where to look for the benefit to the investor?

There are no winners or losers in any game: each participant always loses and gains something in return. At the moment, it is difficult to determine exactly to which countries the UK-registered companies will transfer  all or part of their assets, but it’s worth having a short list of the largest corporations in the United Kingdom (presented in the table on the next page), which will affect the changes in the first place.

Undoubtedly, the loss of access to the single market of the EU countries will be a huge blow primarily for large corporations. Thus, the share of exports from EU countries to Britain is 18%, while the share of total exports to the EU from Britain is 48%, which forms 8% of the latter's GDP. It is logical to assume that large UK companies will seek to maintain their presence in the continental European market. Adaptation in the transition period after BREXIT will entail significant costs for the renegotiation of old and the conclusion of new trade agreements, probably the transfer of part of the capital or all production to other EU countries. 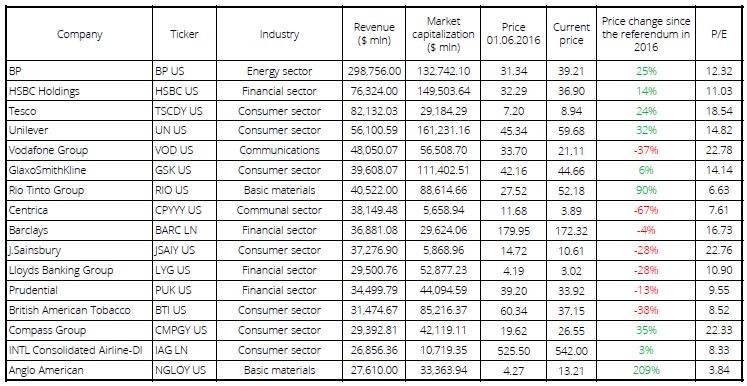 Analyzing the data from the table, we see that the financial sector faced the greatest drop in prices (which is actually expected), however, in other sectors, during the period of the active “bull” market and the development of the global economy, the growth is rather restrained: the share prices are believed to already reflect the possible risks after the country leaves the European Union. P / E indicators also speak of a fair valuation of shares, and in 2020 we can expect a further decline in share prices during the transition period, despite the final terms of the transaction.

Does it make sense to invest in the above companies?

In the long run and a little later - yes. Given the scale of these companies,it can be assumed that they will gradually regain their influence in theinternational market, perhaps even conquer new markets by concluding tradeagreements on more favorable terms without the need to comply with EUdirectives. Do not forget about Trump's somewhat mythical trade agreement,unless impeachment surprises him first.

In the short term, we are looking for those who benefit: in other words, EUcompanies that is most likely to grab “their piece of the pie” in vacant niches.

The British government also announced its intention to invest funds from British Business Bank in venture capital and support the development of start-ups of the country, which theoretically implies a further possibility of investing in funds. The idea, although a little fantastic, has a right to exist. Moreover, such an intention of the government confirms his intention to accelerate the growth in the number and development of new companies. As you know, it is small and medium-sized businesses that more quickly and easily undergo adaptation during transformation periods (if they survive).

The development of the economy, society, and, in our particular case, of the European Union is not possible without transformations, the result of which can only be judged over time. Our goal is to adapt to circumstances in a timely and reasonable manner.